‘Transferable skills’ is a term usually reserved for recruitment agencies or people seeking employment. As a parent who is part of the Mud Pies Nature Playgroup community, I see that this term is just as applicable for young children.

The other night at the dinner table, Miss Almost-Five announced it was time that she begin using a knife to cut her food. Knowing how long dinner normally takes, I was initially reluctant. However, I know it’s important to allow her to be independent, so a knife and a few extra beans were given to encourage this expression of independence.

Of course, not to be outdone Master Almost-Three requests the same. I shrug my shoulders – why not? We’ve got time to kill while Miss Almost-Five gives it a go.

A few squished beans later, I was surprised at what I observed. Master Almost-Three has a much better technique – right angle, correct grip, exact amount of pressure. He holds up a perfectly cut bean as proud as can be. (Miss Almost-Five is getting increasingly frustrated with herself and her brother in the meantime). ‘Wow,’ I think, ‘this kid’s pretty good with a knife.’

Then it dawns on me…every fortnight for a year Master Almost-Three has essentially been practising this. Not with beans though. With a hacksaw and sticks at Mud Pies Nature Playgroup. He’s been learning a life-skill by exploring, experimenting and practising with materials and resources he enjoys. He hadn’t realised it. Neither had I – until now. 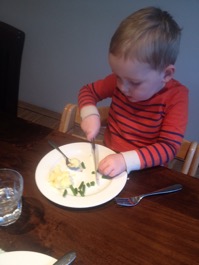 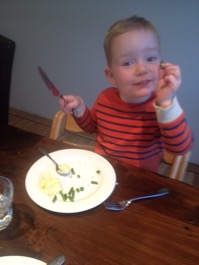 With this realisation, we’ve since been more intentional in providing Miss Almost-Five similar opportunities to play and create with different resources and materials. Who knows? Perhaps she’ll be keen on the Whittling Station at KIN Village Junior and I can recruit her at home in the kitchen as my ‘Head Potato Peeler.’