by Trudi BennettPosted in Schools

Daniel and I are intentional about incorporating sensory risk taking in our programs. Particularly when it comes to exploring sticky clay on our bodies and oozing through our toes.

My passion for sensory risk taking emerged whilst I was working in the kitchen garden at Bold Park Community School making cob with children. Cob is a mixture of sand, clay, straw and water which you need to mix with your feet. In the first year, out of 20 five-year old students, only five wanted to get in to the cob mix. Just one quarter!

The next year, only two students were willing to give it a go. At first, this left me quite horrified, as my expectation was that all five-year olds enjoyed getting dirty. I soon discovered that the children were afraid of getting dirty. They didn’t like it. They thought their mum or dad would be angry that it would make their clothes dirty. Or they were afraid about getting the inside of the house dirty. Some were just generally not allow to get dirty, or they had sport after school and they needed clean clothes.

Our children are growing up with this conditioning that our houses and our clothes must always be clean.*

Some years have passed since my time in the kitchen garden. We have since had the opportunity to run our Muddy Gully nature-based incursion for children with a similar cultural and socio-economic background to the students who encountered the cob mix. I was taken by surprise that when I introduced the activities and spoke about stamping in a piece of clay, I saw some fear in the children’s eyes.

‘How many of you love to get dirty?’

‘How many of you are really excited about playing with clay and stomping your feet in clay today?’

Just one third of the children raised their hand.

‘Who’s feeling a little bit scared today about the clay and would prefer to stay clean?’ Almost two thirds of the group raised their hand.

The teacher sent the groups out one at a time. We had several parents to assist and support the 40 children. Our Muddy Gully nature-based incursion offered five different stations: 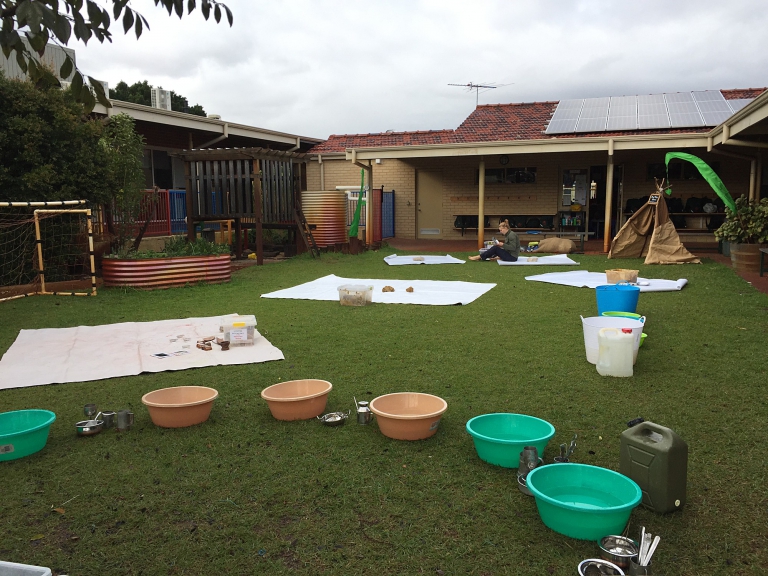 A group of girls had put their hand up at the beginning of the session to advise they don’t like getting dirty – they went straight to the water play. They spent much of their time potting and playing at this station.

Five minutes prior to the end of the incursion, the girls were yet to explore the farm clay station – a full body experience. They had been watching from the safety of the water play station deciding whether to give the red, oozing clay a try. They ventured over to the farm clay station. I stood at the edge of the mat with the girls and suggested we could just put our big toes into the mud. They agreed.

The clay around the edges of the mat had gone quite firm and had a leathery texture to touch – it was not particularly sticky or gooey anymore. When the girls discovered that this experience was safe, they were more comfortable to proceed and put their full foot into the clay. One of the girls was reluctant to take her gumboots off so she explored the mat with the protection of shoes. The other girls got to the stage where they were walking on the clay and then…we started seeing signs of JOY! At last, the girls were delighted they overcame their fear of the farm clay and the risk it presented.

To explore further, I challenged the girls to spin in the clay. They loved the feeling of spinning on the clay and were eager for suggestions to challenge them further. I proposed they put their feet in the water bowl and then come back to the mat and feel the change in the slipperiness of the clay as they continued to spin. The girls enjoyed having this time playing in the space and challenging their bodies on the slippery clay mat.

Then there was a group of rowdier boys who made a beeline for the farm clay. As they reached the mat, they hesitated a little. Then…STOMP went their feet and the clay oozed between their toes. They walked on the plain white mat and saw their footprints. This play evolved and carried on for quite some time.  As the initial small lump of clay spread out, so the slipping and sliding actions across the mat increased from the higher energy children.

I replenished the supply with a big lump of the farm clay that was squishy and slimy on the top and I stood right on top, being sure to be careful and intentional with my movements. Then I balanced on one foot, and then the other. I challenged the children to balance on the lump of clay without toppling. They each took turns, taking the cue from my modelling to move slow and intentionally. As their confidence grew, their movements became more rapid and the challenges they set each other became more daring.

The children stabilised themselves when they were off balance by simply lowering their foot or stretching their arms wide. Inevitably one child fell and took the opportunity to speak about falling on your bottom and not your hands and discussed other good practices related to safe falling. 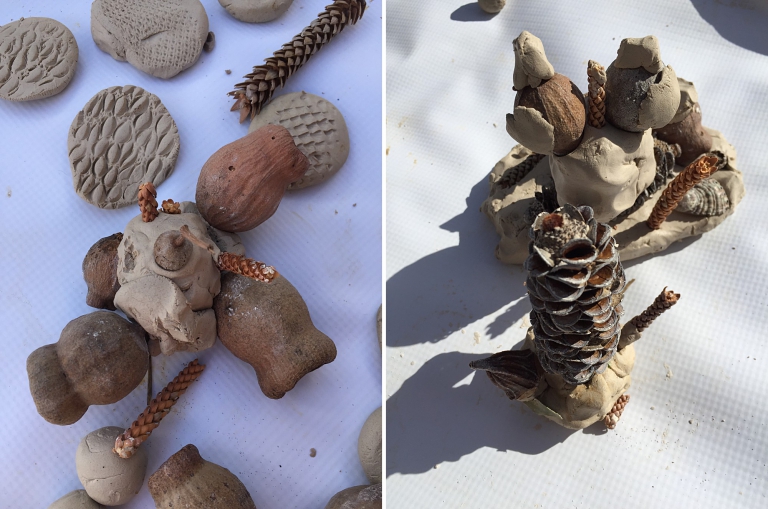 One boy approached me and told me he was bored. I looked around and saw there was lots of activity. No-one else appeared bored. So, when I enquired further, he told me that he’d been to all the stations, was finished and was now bored. I looked at the boy – he was very, very clean. I asked what he had done at each station, since I couldn’t see that he had painted his face, there was no clay on his feet and no evidence of having made mud pies.

Finally, the boy revealed that he doesn’t like to get dirty and is actually quite fearful of feeling dirty. He reminded me again of his boredom and asked if he could retrieve a coin from his bag. I explained that it’s not the right time to play with the coin. It might get very muddy, or lost. I suggested that we could experiment together at the sculpture station and make our own coins. Again, he reminded me of his fear of getting dirty. He stated that he did not want to touch the clay. Therefore, I again acknowledged his feelings and suggested that I could roll the ball of clay and squash it and his role could involve imprinting the clay coin with some of the natural elements we have available, like a gum nut, seedpod or leaf. The boy tentatively approved of this idea.

He sat at the edge of the mat and I encouraged him to come a little closer, while I also moved the materials a little closer toward him. I fulfilled my role and then I offered the boy some clean nuts and leaves to finalise the coin production. We were both happy with the result. So we continued and explored patterns. Our play and interactions resulted in the boy feeling comfortable to pick up one of the coins we had manufactured. It was a small moment, but nonetheless a significant moment.

These reflections highlight some of the reasons we believe it is important for children to have mud days, incursions like Muddy Gully and our playgroups where we incorporate mud and clay. These experiences engage with children at lots of different levels, whether it is a first step toward taking a tactile sensory risk or an additional challenge for people who are comfortable with risk taking and are keen to extend further. 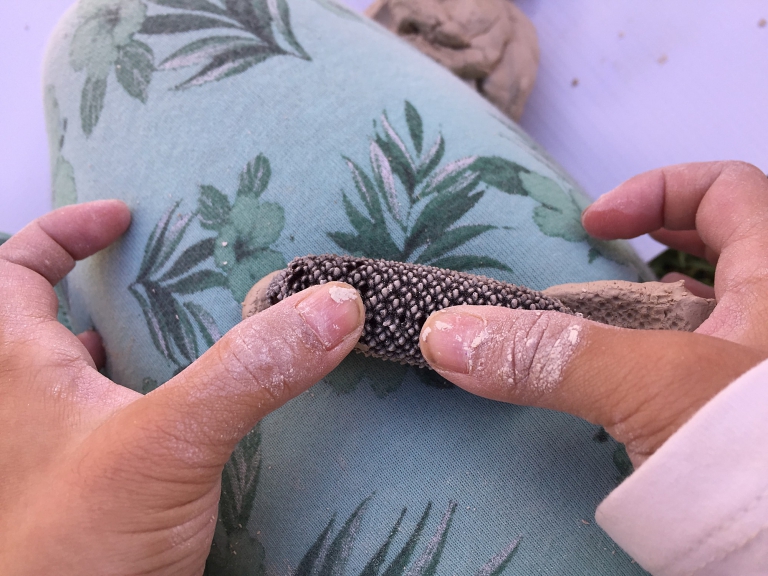 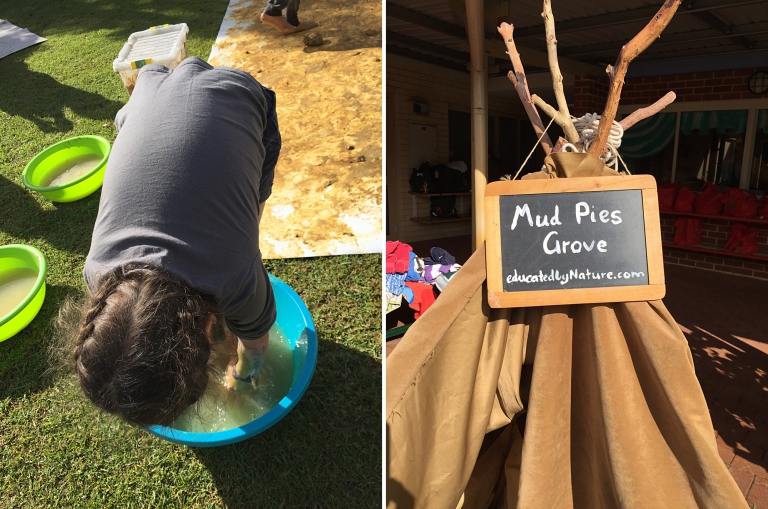 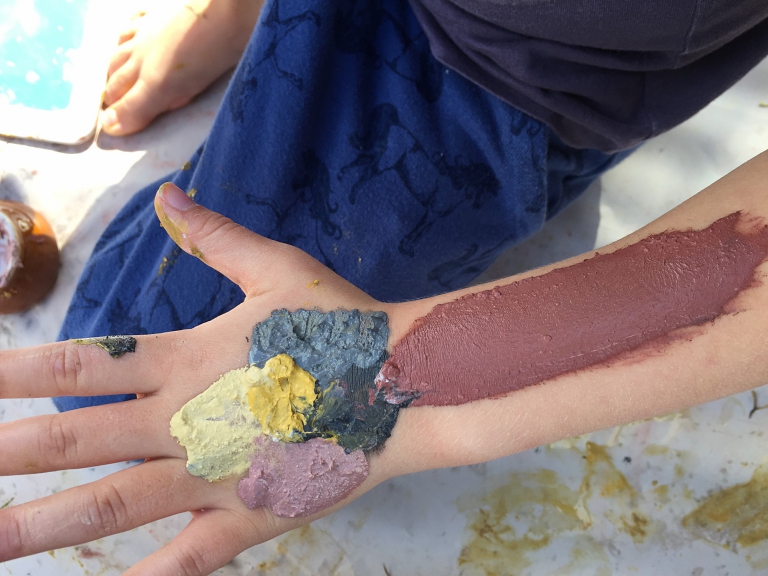 To book a nature-based incursion for your school or day care, please contact us, book, or make an enquiry here.

*’Dirt is Good’: Why Kids Need Exposure to Germs

« The Importance of SanctuaryMore than a cubby – Cubby Building »