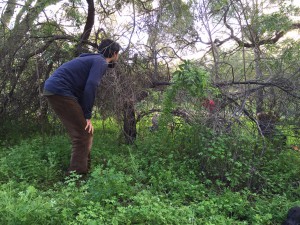 ‘Alright kids, imagine you are a Chuditch*, silently hunting for your prey. Carefully move across the landscape…’

We had only taken a few delicate steps when we were interrupted by a wandering group of fellow wild children, whom, like me, were surprised to come across each other in this bush setting.  They were a group of students whom I teach at a local school.  Exchanging pleasant Hello’s and What are you doing here’s, the foreign wild tribe brazenly departed as quickly as they arrived. 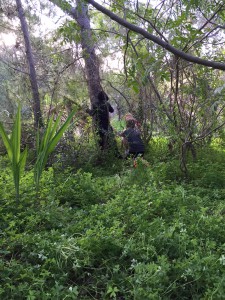 The Bush Inventors quickly and joyously took to the challenge of stalking this other wild tribe. We laid low, took courageous steps, leaps and jumps and all the while keeping our prey in sight.  Very early in our hunt we came close and began to plan an ambush. Gathering excitedly, we discussed and shared animal calls to communicate the timing of our pounce. We were finally ready. But, alas! Our prey had moved on.

Through hidden spider-webs and rough rocky terrain we navigated the low-lying scrub following the other wild tribe until we were eventually found out.  Both tribes met sporadically with an air of uncertainty, anticipation and curiosity.

Naturally parting ways, the Bush Inventors came together, taking stock of where the hunt had brought us. We looked out to see a grand vista of ocean, bush and suburb. 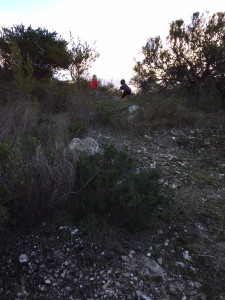 What a rich and playful experience!  Unbeknown to them, the Bush Inventors were developing a dynamic range of skills and faculties.  Their multi-layered experiences of focussed listening, dynamic movement and navigation whilst maintaining the cohesion of the group all worked together to instil an awakened presence – a potent place of learning.  Furthermore, their playful explorations connected them with our animal cousins, the relationship between predator and prey, and they formed new connections with their landscape.

So, although this time around our prey detected us, we were well fed by sharing far-reaching views, a better understanding of our land and a whole lot of fun! 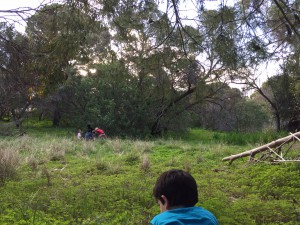 *Chuditch – The Western Quoll, or Chuditch (a Nyoongar name), is Western Australia’s largest carnivorous marsupial. It has 40–70 white spots on its body but not on its tail. The tail is 21–35 cm long. 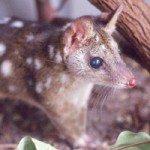